Help save a masterpiece

The Dumbarton Oaks Park Conservancy is in the midst of a campaign to win $75,000 from the “Partners in Preservation” $1 million giveaway in the Washington, D.C., metro area.  The giveaway is sponsored by the National Trust for Historic Preservation and American Express.

You can vote for the DO Park HERE* every day through midnight on May 10.(post from http://enclosuretakerefuge.com, Thank You!)

(And voting enters you in a contest to win a three-night stay at a Marriott hotel.)

Dumbarton Oaks Park (not to be confused with the adjacent Dumbarton Oaks Gardens) is one of the masterworks of landscape architect Beatrix Farrand.

In 1928, she composed the park as a series of paths and meadows along a small tributary of Rock Creek and had them planted out with drifts of native and exotic wildflowers, bulbs, and woodland shrubs.  Eighteen waterfall dams, two arbors, and several benches and footbridges were build in the rustic Arts and Crafts style. 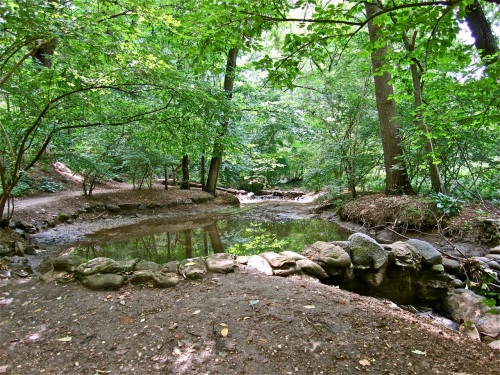 Even with many years’ damage, the artistry of Farrand’s stonework shines through.

Sadly, the 27-acre park has suffered greatly from lack of sufficient resources since 1940, when it was turned over to the National Park Service.  However, in 2010, the Conservancy was formed to restore the park to its former glory by raising money and fielding teams of volunteer “weed warriors.”

Beatrix Farrand was America’s first female professional landscape architect and one of eleven founding members of the American Society of Landscape Architects.

Participants at a recent conference on her work lauded her as a “scientific-minded experimenter, an early proponent of native plants, a leader in ‘pre-ecological design,’ an expert in stormwater management, and a flexible and innovative designer who mastered numerous styles,”reported The Dirt, the blog of the American Society of Landscape Architects.

Please vote and spread the word! The $75,000 will repair the park’s stonework at the east falls dam and viewing platform.

*The first time you go to the site, don’t click ‘vote’ right away. Go to ‘log in’ and register. Then, you’ll receive an e-mail asking you to confirm your address. Thenyou can log in and vote. It takes a couple of minutes, but you’ll be able to vote in seconds for the next five days.  (You must be a legal resident of the U.S. to be eligible to win the free stay in  a Marriot hotel.)